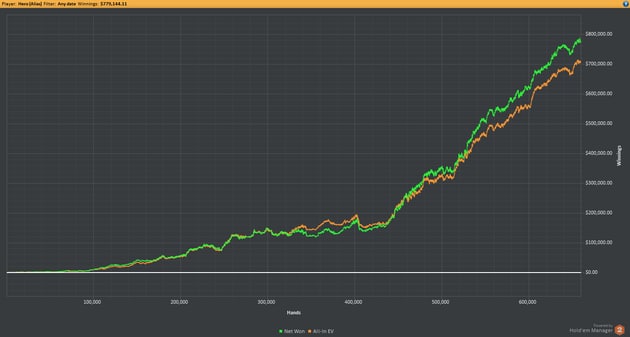 4 tips to become a successful online poker player in 2022

About a year ago, a rather interesting diary was published on the poker forum “Run It Once” by an ambitious player who plays online under the nickname “IAmNeo”.

If we believe the information from open sources, Matt has earned about $860,000 from poker in the last 3 years. Matt’s diary contains not only motivating charts, but also important tips, thanks to which any player with the right approach will be able to repeat the author’s path.

The material was prepared by POKERBOTAI website for local readers.

As Matt says, it took him a long time to find a really good coach. Don’t spare any money at this point. Without a coach it’s next to impossible to get good results. Unfortunately, many aspiring players are afraid to invest money in their development and regret even thousands of dollars a year. And this despite the fact that the cost of a good education in all areas of activity is measured in tens of thousands of dollars.

Matt has been playing poker for many years, but he only recently managed to turn a good profit. The main thing, according to the creator of the diary – know how to update. It is necessary to constantly look for new trainers and training forums that you have not previously considered. A great solution would be to organize a consultation with an experienced player, from whom you would like to get some lessons. That being said, it is important that the student and the coach feel a mutual understanding. It is better to learn from a coach who plays on the NL500 limit than an NL1000 coach who doesn’t understand you. Working together with a player who knows how to convey useful knowledge correctly and efficiently is dozens of times more effective than developing on your own.

Tip #2. Decide on a specialization

Many players can’t sit still in one place and constantly change their specialization. Matt made the same mistake. He switched from cash to MTT and back a few times. In his diary, the player notes that such decisions only had a negative effect on his limit climb.

You can only switch from one discipline to another when one of them has already been conquered. If you switch from cash to MTT, in the first specialization the skill level will rapidly decline. This problem is associated with the fact that players become bored playing in one discipline, but you can add some variety without changing the specialization. For example, you can change poker rooms every few months or enter MTT tournaments periodically.

If you can’t find a coach, you need to find at least a few players with whom you can share your results and exchange useful information. Members of the poker community may seem toxic and bitter, but there are many good players among them who dream of changing their lives through poker.

Tip #4. Believe in Yourself

You can’t succeed at poker, or any other game, without believing in yourself. If you can’t get any results, you just need to increase your efforts. Everyone has the power to grow and change his life.

To become a successful online poker player, it is not enough just to take another course or watch several streams from professional players. First of all, you have to look in the mirror and say to yourself: “I will do everything to reach my goal”.