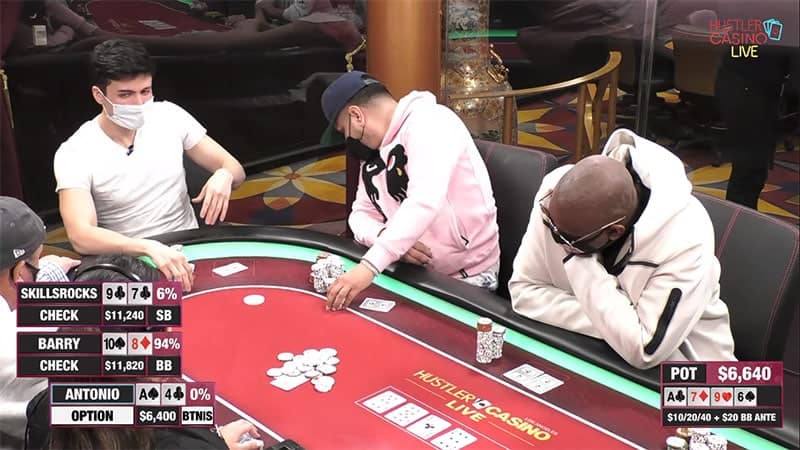 Hustler Casino is a popular American poker gambling establishment in Gardena, California, where live poker games are regularly filmed and uploaded to YouTube and other video hosting sites. But more recently, Hustler Casino has become the center of a real scandal.

The protagonists in this scandal were Julio “Skillsrocks” Cedillo, who no one knew anything about before the streaming service began, and Barry Wallace, the producer of the comedy show, who was hurt by Cedillo”s actions. He is said to be a great guy, often giving generous tips to dealers.

The first hand that blogger Alex Duvall brought to his attention was the one in the fifth hour of play. The player to the right of the cheater, former SoFlo blogger Antonio was the first to enter the pot, drawing from A-4 to $1, 200. Cedillo made a call with 9-7, and Barry Wallace followed suit with 10-8. The pre-flop pot reached $3, 640.

On the turn came a 6, closing Wallace”s straight. Cedillo and Wallace skip bidding, after which Julio kicks the former blogger underfoot, a moment captured at 4: 07: 02.

Antonio ignores Cedillo and puts another $2, 400 in the pot. Commentators are confident that Skillsrocks will now make at least a call. At the same time, the table started talking about kicking. Julio began to make excuses that he supposedly didn”t touch anyone. After looking at his cards a few times, Cedillo suddenly announces a pass to the surprise of the spectators and commentators.

On the river comes 5. SoFlo Antonio goes all-in, and Wallace calls. After that, Barry stands up and says:

“Whatever it is now between you guys, but that”s not cool! ” – and walks away. At this point Julio Cedillo finds his cards in the pass and catches up with Barry to show him what he has discounted. What did he do that for? No one seems to have figured it out.

Barry Wallace, whose wallet is somewhat “thin” because of Julio Cedillo”s actions, reacted to this situation as calmly as possible. He stated that Skillsrocks” only fault was that he kicked another player to get him to discard his cards.

“I should have taken better care to protect my cards, it”s all my fault. But that”s part of the game, ”  – Wallace said.